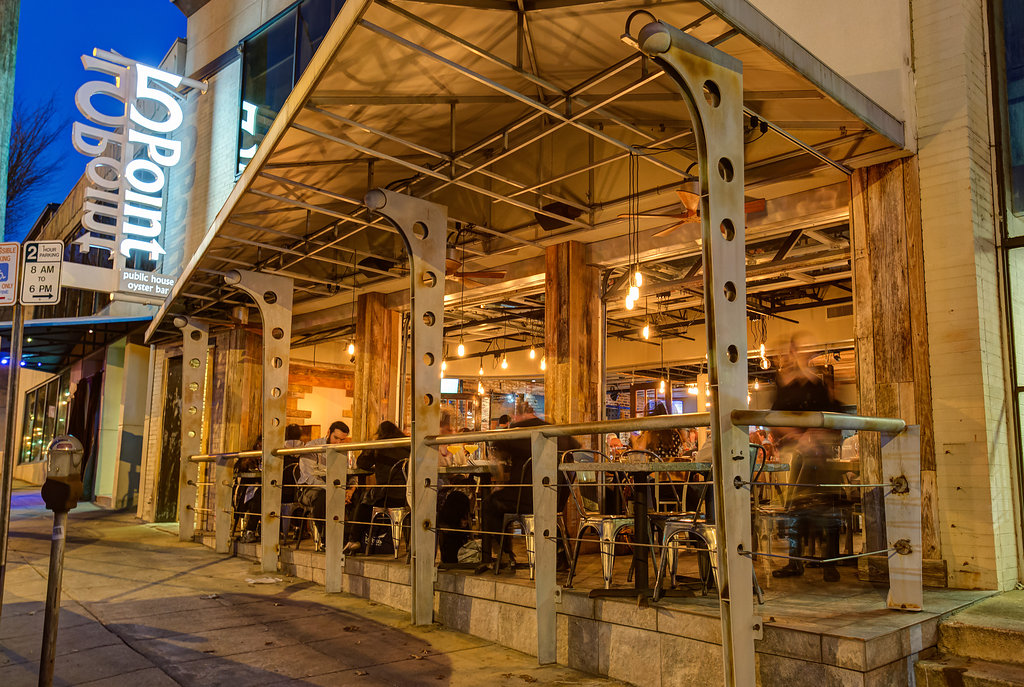 At 5 Point Public House Oyster Bar find a new, fresh take on seafood and more from celebrated chef and owner George Reis. Although just next door to his flagship Ocean restaurant, the new venture could not be more different in its offerings, allowing Reis to venture outside of the seafood-centric world of Ocean and exercise his creativity. 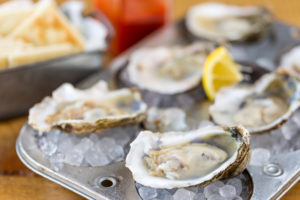 The offerings include an oyster bar that serves only Southeastern coastal oysters as well as sushi, but also decidedly non-seafood items, like oven breads, chicharrones nachos and a variety of specialty burgers that are quickly becoming one of the biggest draws to the restaurant. Influences come from a variety of items, recipes, countries and cultures, with mashups that only a chef of Reis’ vision could put together. 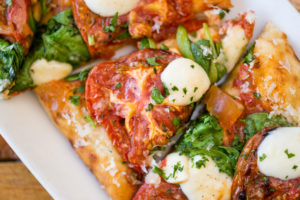 5 Point Public House also allows Reis to dive into the craft beer scene that has swept through the Magic City in recent years, with more than 40 craft beer offerings, two dozen draft beers available alongside a number of cocktails and eight keg-style wines on tap to pair with the eclectic food offerings. 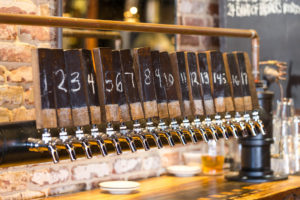 The new gastropub focuses on good food served in a casual, pub-like setting, where the focus is on quality and comfort for the patrons.

Their unique craft beer delivery system pumps your favorite craft to your own personal tap at a pub table…very cool indeed. 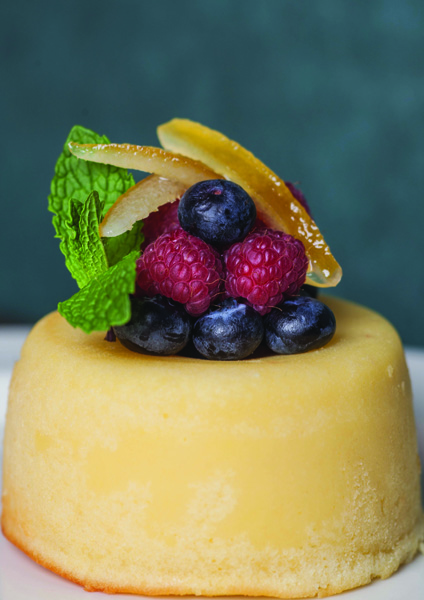 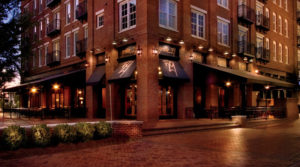 Located in the heart of the beautiful Village of Providence, Grille 29 sets the standard for fine dining in a casual atmosphere in Huntsville through its sophisticated sizzle. Grille 29 continues to be ranked in the top group of “Best Restaurants” on Trip Advisor.

Being in the Rocket City, Grille 29 embraced the space experience with the starry sky display over the bar. Over 1.3 miles of fiber optic lighting was used to make the constellations in the northern hemisphere and guests can catch a glimpse of a shooting star or comet overhead as they enjoy their dinner. 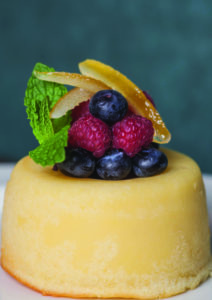 Your culinary journey will not be complete unless you experience dessert at Grille 29! Chocolate Peanut Butter Truffle, Lemon Lava Cake and Crème Brulee are just a sampling of delectable desserts that you must try.

Make Grille 29 your restaurant for meeting friends after work, celebrating a special occasion or enjoying a business luncheon.

Your table is ready and waiting!

Nick’s Ristorante in Huntsville, Alabama
A Slice of Northern Italy with a Broad Sense of Service
by Jenny Adams   photography by Brent Boyd

Sinatra’s best lyrics are floating through a microphone in the lounge. The lighting is dim in the larger dining room, where the woods are polished and gleaming. The steaks are sending clouds of charred perfume off hot plates. It’s another night at Nick’s. However, what’s become beloved in just a few short years by locals is often a refreshing discovery for those visiting from out of town. This steakhouse has a serious love of premium cuts and a philanthropic side for the men and women of our Armed Forces. Behind it, all is owner Nick Mikus—a man who served in the Army around the globe for nearly five decades before settling down to serve up some of Huntsville’s most lauded cuisine. 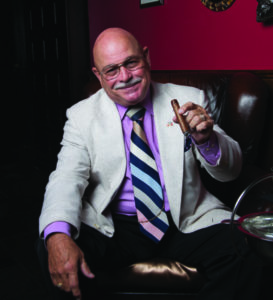 Nick opened his northern Italian steakhouse in 2010 alongside his wife, Sherry, who sadly passed away in 2015. In just eight years, the restaurant has become a cornerstone in the community. It’s located off-the-beaten-path, and for Nick, he’d want it no other way.  “The location is paramount to what we do. I want people to come and find us,” he says. “We are the hidden gem of fine dining in Huntsville and The Valley, where you discover something remarkable and enjoy finding your way back.”

“This restaurant is something we talked about doing more than 40 years ago when our mom was still alive.” Inside the space, you feel like you are walking into someone’s home. There are family photos on the wall and the bistro has leather sofas. “We want guests to relax just like they would at home. The best compliment we receive is when guests tell us being at Nick’s feels like coming to your house for cocktails and dinner.”

You will definitely be welcomed by the family atmosphere and literal family ownership, but there are aspects of Nick’s you cannot find in most homes. The quality of steak on the menu is a serious component, and it sets the place apart in the Southeast. Nick’s is one of the only Certified Angus Beef operations in the state of Alabama, which means every single cut of meat is in the top 5-percent of all beef produced. Executive Chef Tom Chapman sources his 21-day aged cuts from three farms in the Midwest, and they are butchered and packaged specifically for the venue.

“We have a spice blend that Nick and I worked to create,” says Chapman, who’s run the kitchen six years now, and studied in the field under a noted Italian chef before joining this team. “Our seasoning is seven ingredients: salt, pepper, garlic, smoked paprika, ground oregano, cinnamon and coffee grounds,” he says. “The coffee grounds add a robust flavor that we find complements a steak very well.”

“Our most popular steak is the filet, and when you hear the term cuts like butter, it definitely applies,” Nick laughs. He loves sitting down to the New York Strip. “It’s my favorite,” he says, “because when I cut into a steak, I want to feel the heft of it. We also have a House Sirloin that’s the best deal going. It’s 12 ounces for under $30, and you can easily feed two people.”

A man who comes from a long line of proud Italian heritage, and who still has family operating restaurants over in Italy, Nick serves a traditional menu one might find in Florence, Italy, including a mean, thin-pounded veal and a delicate, rich, mushroom risotto. 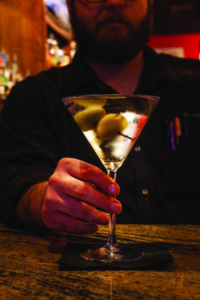 “You won’t find the heavy dishes like lasagna on our menu,” Nick says, “because we stay true to the cuisine of Northern Italy. “We have a beautiful bar pizza on the bistro side of the restaurant that we do on the grill, and the few pastas we do have are very light, with house-made sauce. Everything is created here, including all of our desserts.” The creations behind the bar are the work of Lounge Manager/Mixologist Kenny Burke and his staff of highly trained bartenders. The service staff led by Joey Hicks is top of the line and second to none.

While the vibe might be a throwback to the classic, Rat Pack-era and the food might be very traditional northern Italian, what surprises some new visitors is the restaurant’s dedication to the men and women of the American military. Nick is a veteran himself, having served more than four decades in the armed forces. A Vietnam veteran, he’s lived all over the map, from time in the Pacific to years in Europe.

Nick’s Ristorante is a VA certified service-disabled, veteran-owned small business (SDVOSB). The sense of “family” here extends not just to the ownership and the staff, but to all those who have served our country and come in to sit and be served as a thank you. Nick opens the restaurant early to host events on certain days, whenever groups need a place to gather.

“We have a lot of regulars and within that, a lot of our customers are military,” he says. “We support Wounded Warriors, Still Serving Veterans, Veterans United and many other veterans groups.” 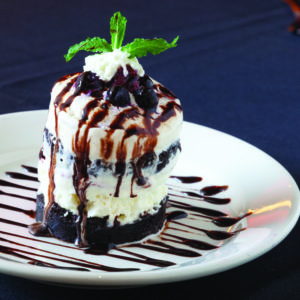 Many restaurant owners could look around the room and notice familiar faces. At Nick’s the clientele can see the devotion and near fanaticism some hold for his choice cuts of ribeye and super creamy risotto right on the bistro wall. The cheekily named Mafia Club was set up a few years ago, and it is, according to Nick, “about as good of a return on investment as you’re ever going to find.” Be sure to ask Nick or one of his team members about this tremendous offer.

Nick explains, “people love bringing business groups or large parties in here. It takes the hassle out of splitting a check or the awkwardness of paying. You just tell your server that you have a Mafia Club membership. They take your name and number, and you just sign—no credit cards or cash required. It comes directly out of your account.” 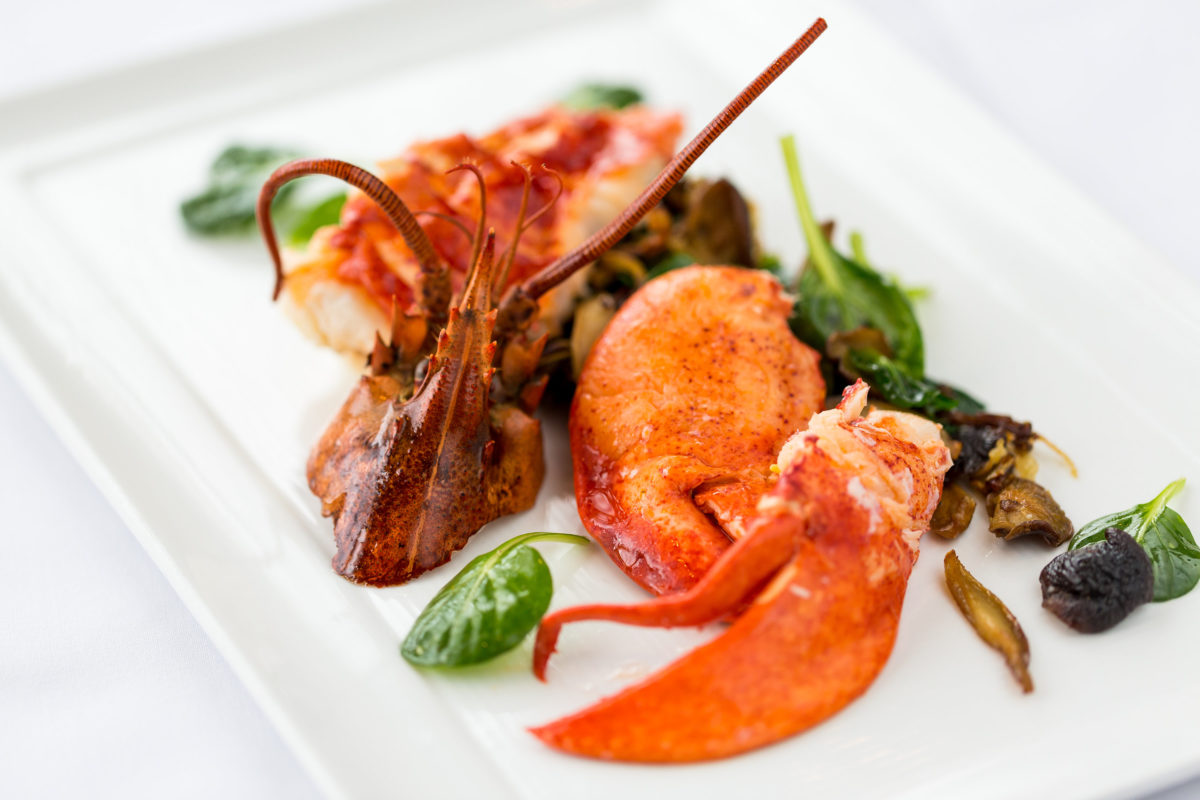 Voted Best Restaurant, Best Chef and the recipient of AAA Four Diamond Award for the past ten years, Ocean offers fresh seafood in an exciting and contemporary atmosphere. The bold seafood menu at Ocean makes the restaurant a premier location for fine dining in Birmingham. Ocean is widely known as one of the city’s crown jewels as accolades have been heaped on the restaurant, chef and owner George Reis and on the restaurant’s fine wine offerings.

Many patrons stop by for a signature martini at the newly renovated white marble-topped bar. The beautiful environment, paired with one of Ocean’s signature cocktails, is a perfect way to start the night. Other locals head straight to the Raw Bar for seafood offerings not found anywhere else in the city. From the imposing Seafood Tower that showcases most of the Raw Bar’s offerings to the various oysters, lobster, crab legs and mussels served at the bar, it is a wonderful taste of what Ocean has in store. 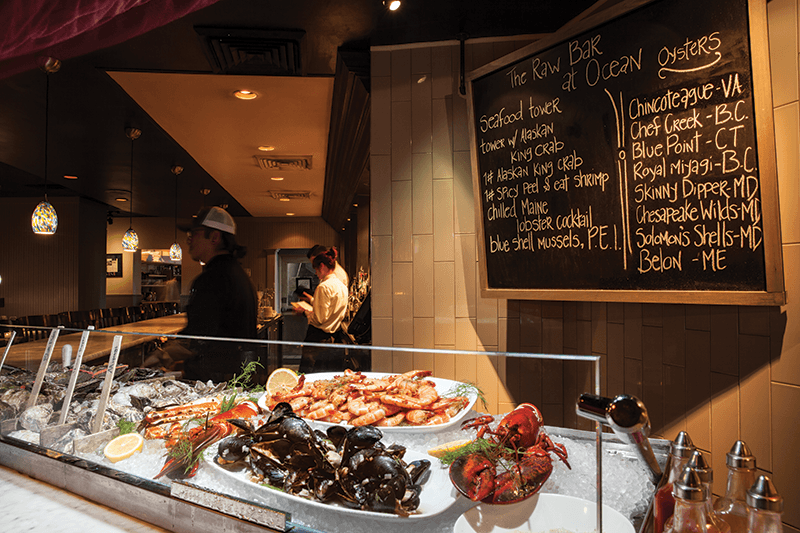 The casual atmosphere of the patio dining area is perfect for a low-key night out with friends or entertaining clients, but be sure to sample the award-winning and recently restyled dining experience inside as well. Any seafood lover is certain to find their favorite on the menu, whether it be shrimp or one of the restaurant’s whole fish offerings, which changes daily.

For those who aren’t in a seafood mood, Reis offers a cooked-to-perfection Hereford filet mignon as well as a number of salads and desserts that will satisfy any craving. 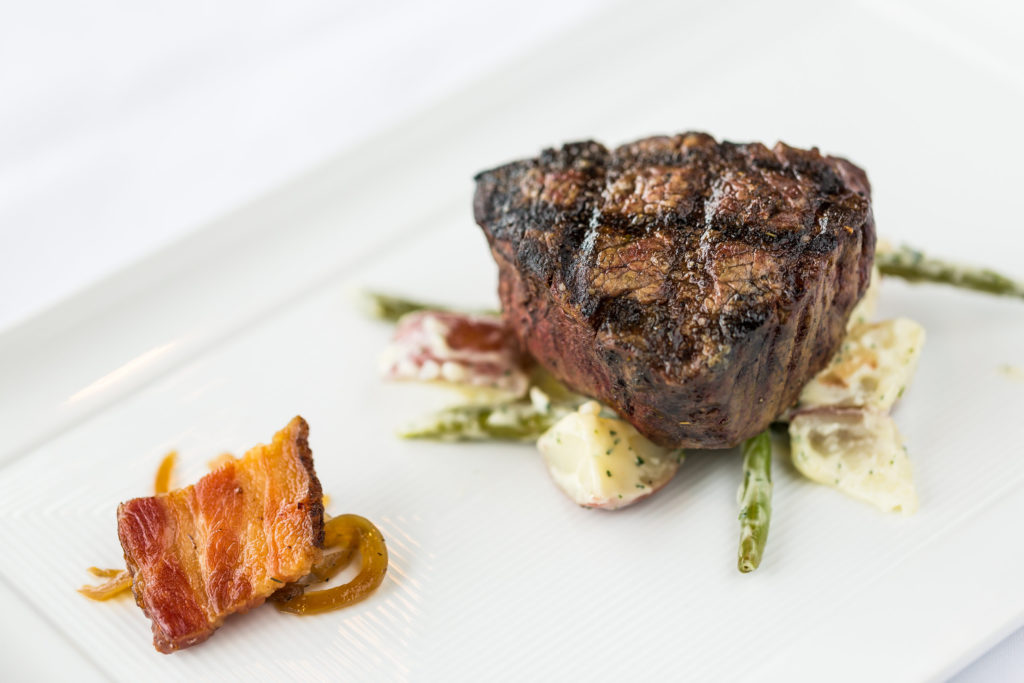 Located in the historic Five Points South area, Ocean is at the center of the city’s entertainment and culinary center.

Reservations are encouraged and there’s ample seating at the bar. 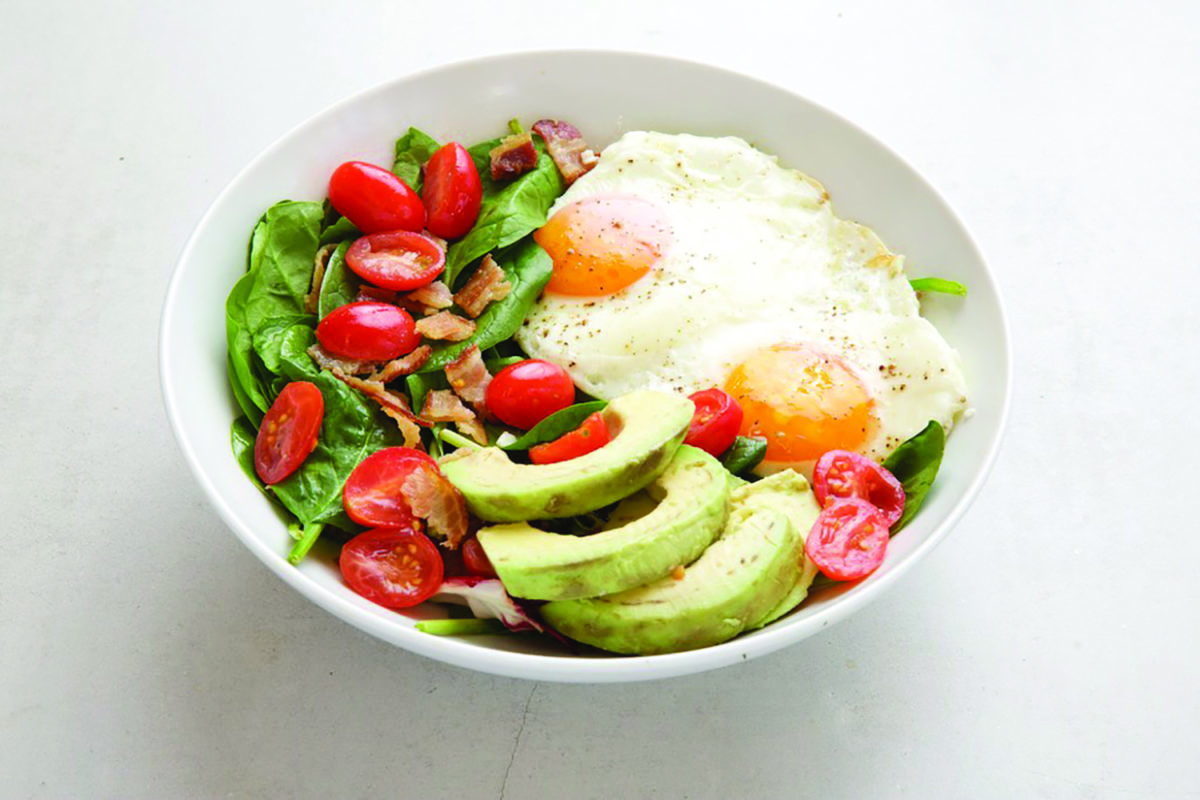 Dining at home made simple and delicious: Market Table brings joy back to the table with scrumptious breakfast and lunch menus served in their cafe. They also offer deliciously prepared meals, meal kits and a variety of proteins and sides for dinner. In their market, you’ll find wine, desserts and snacks to fulfill any and all cravings. 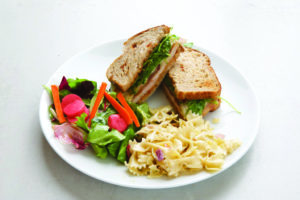 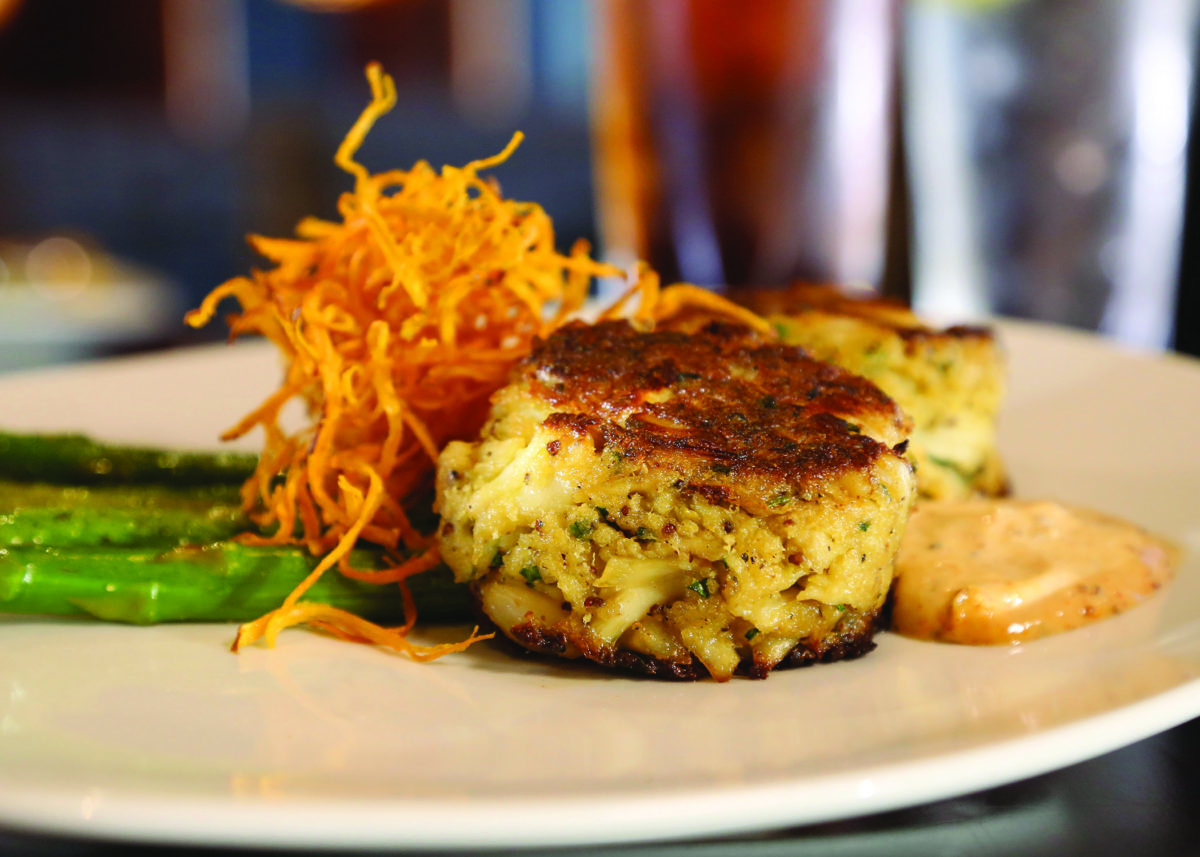 Perfect for lunch, a casual dinner, drinks and appetizers after work or for Birmingham’s hottest weekend brunch. Grille 29 has something for everyone on our menu. You don’t have to be dressed up or wait for a special occasion, just bring your appetite. We pride ourselves on providing an unmatched casual dining experience in Birmingham. We look forward to seeing you at Grille 29! 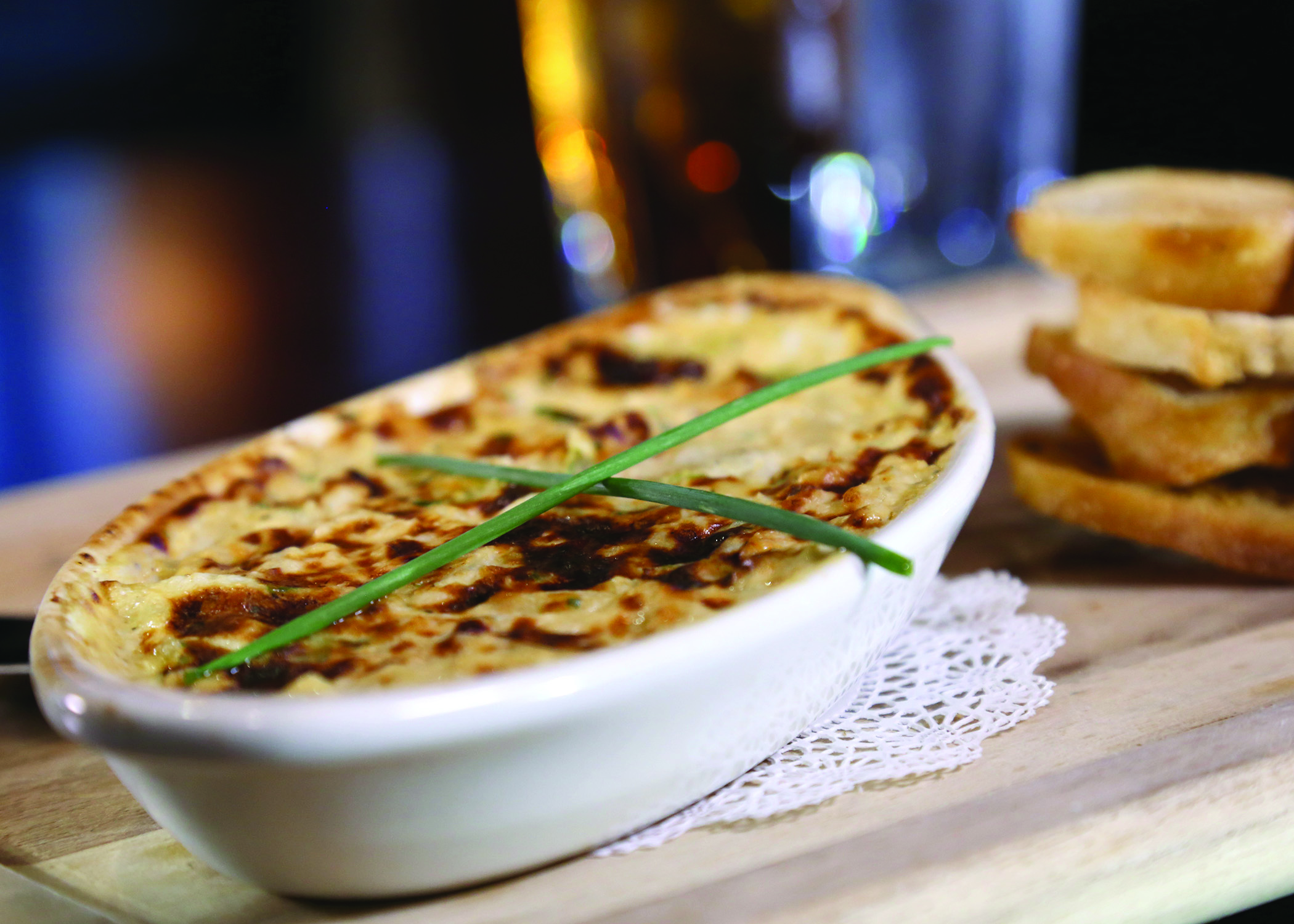 Grille 29 is located at Brookwood Village on Village Lane at the edge of Macy’s parking. We are centrally located between Vestavia, Homewood and Mountain Brook just off Hwy 280 or Hwy 31 and just down Lakeshore from Interstate 65. Why the name Grille 29? We feel like 29 is the perfect age. You are old enough to know better and young enough to do it anyway! According to the Periodic Table the number 29 represents the element of Copper. That’s why, when you are in Grille 29, hints of copper are all around. And finally, do you know the main route in and out of Napa Valley and Yountville? You guessed it…Route 29. Many of the wines featured in the restaurant are produced from this region.

We pride ourselves on providing an unmatched casual dining experience in Birmingham, Alabama. Join us for lunch, dinner, or brunch — including our new Saturday Brunch starting at 10 am — and enjoy 50% off Happy Hour specials Monday through Friday from 3-6pm.