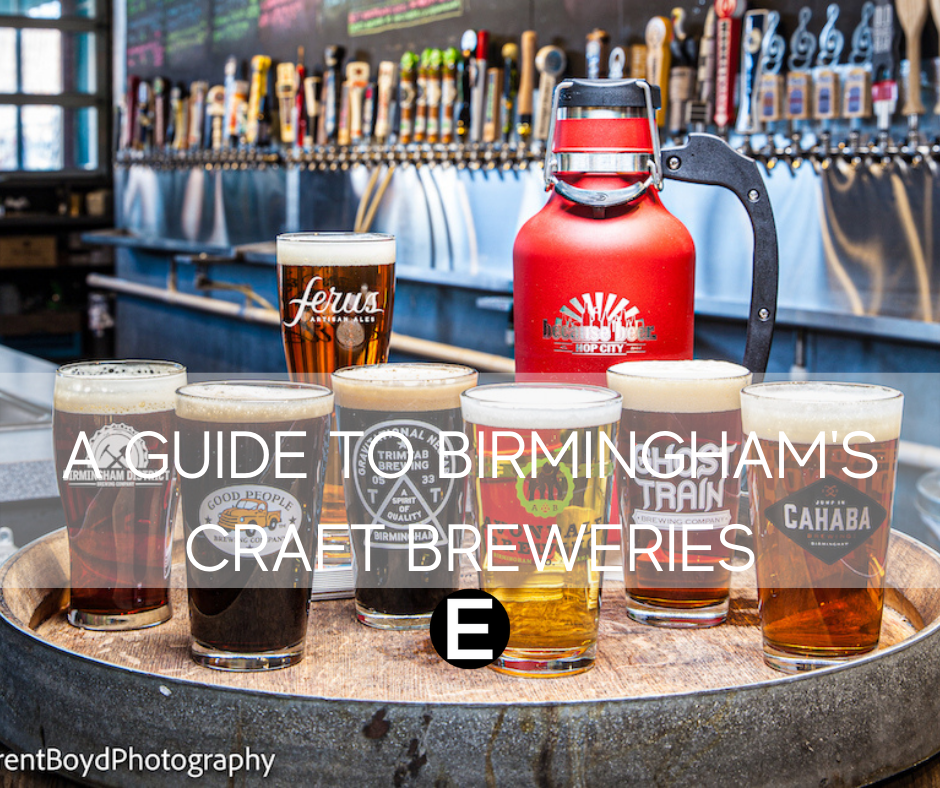 Craft beer became all the rage several years ago, and the Magic City has been fortunate to have several locally-owned and operated craft breweries that are brewing beer that is not only tasty but also pays homage to the city’s rich heritage. Check out these unique breweries and let us know which one is your favorite!

It all began when a circus owner’s misfortune at a game of cards bestowed the city of Avondale with a great gift. His prize attraction, Miss Fancy the Elephant, would inadvertently become the city’s greatest spokesperson. Known as the Queen of Avondale, Miss Fancy performed a wonder of tricks at her home in Avondale Zoo. During prohibition, City Hall kept a special Miss Fancy reserve on hand at all times in order to treat her stomach ailment. When her stomach started acting up, Mr. Todd would call the prohibition officers down to the zoo for a little hooch action.

In the South, when someone is genuine, honest, and caring, they’re called “good people.” That’s who Good People Brewing Company keeps in mind when they’re crafting beer—the kind of humble, caring, and respected folks they grew up with. That philosophy has carried over to how they designed their taproom and social spaces. The taproom and outdoor patios and terraces allow for beer-lovers, regardless of how many there in a group, to comfortably sit and enjoy great beer and engaging conversation. Great beer is meant to be set down on a tabletop and overshadowed by conversation, friends, family. And every glass is an invitation.

THE TAPROOM The vast indoor taproom features all of Good People’s mainstay brews and a rotation of seasonal and specialty brews only available on-site. Watch the magic happen in the brewery through the large windows while discovering your next favorite beers from the oldest and largest brewery in Alabama. Tours available.

Eric Meyer and Andy Gwaltney, friends with more than a common interest in craft beer and home brewing, came together to found a brewery to celebrate life’s passions and provide Birmingham with a broad selection of flavorful craft beers. With a love of the outdoors, they named the brewery after Alabama’s iconic Cahaba River. In the summer of 2011, they devised a plan to build a brewery and thus Cahaba Brewing Company was born.

Crafting excellent beer is their passion. Like the river itself, it is the source of the journey. They didn’t know what was around the bend, but this they did know—sitting on the bank was not an option. Now Eric and Andy are supplying Birmingham bars and restaurants with craft beers such as White IPA, Liquidambar, American Blonde, Ryezome Stout, Oka Uba IPA, and rotating seasonals.
cahababrewing.com; 205-578-2616; 4500 5th Ave S, Bldg C, Birmingham, AL 35222; Taproom hours: Mon—Thu: 3p-10p; Fri—Sat: 12p-12a; Sun: 12p-8p

Birmingham welcomes its newest member to the local craft beer family, TrimTab Brewing Company. A trim tab is a small rudder on the larger rudder of a ship – an unassuming device that requires little effort to steer an ocean liner or airplane, no matter the size. Using that metaphor as a namesake, TrimTab Brewing is dedicated to three things: celebrating people that are small sources of large-scale change, crafting balanced beers, and having a lot of fun while they do it.

The brewery launched in 2014 after three long years of hard work transforming a 14,000 square foot car museum into a production brewery. With the combined efforts of brewers from some of the most respected breweries across the country, TrimTab Brewing showcases a wide portfolio of unique styles of beer ranging from their flagships TRIMTAB IPA and Pillar To Post Rye Brown, to seasonal favorites such as Cucumber Saison and Raspberry Berliner Weisse.

Come check out Birmingham’s newest craft brewery located at Sloss Docks, with dramatic views of historic Sloss Furnaces and a lively railroad scene from the tap room, porch and vast beer garden.
Master Brewer, Tosh Brown, freshly brews popular core Back Forty beers (Naked Pig, Truck Stop Honey, Freckle Belly, Paw Paw’s, etc.) as well as a steady rotation of new experimental beers available only in the local market.
Grab a pint and enjoy a delicious meal from Executive Chef, Russ Bodner, who offers a creative menu sourced primarily through local growers. Their Taproom Leader keeps the atmosphere fun with lots of family-friendly activities, including sports on TVs, Cornhole, Ping Pong, Foosball, Woofday Wednesdays for pups in the garden, yoga on the porch, Thursday Trivia, and frequent live music from local and regional performers.
Check social media for an updated calendar of events, menu and beers on tap, and come be a part of one of Birmingham’s hottest venues. 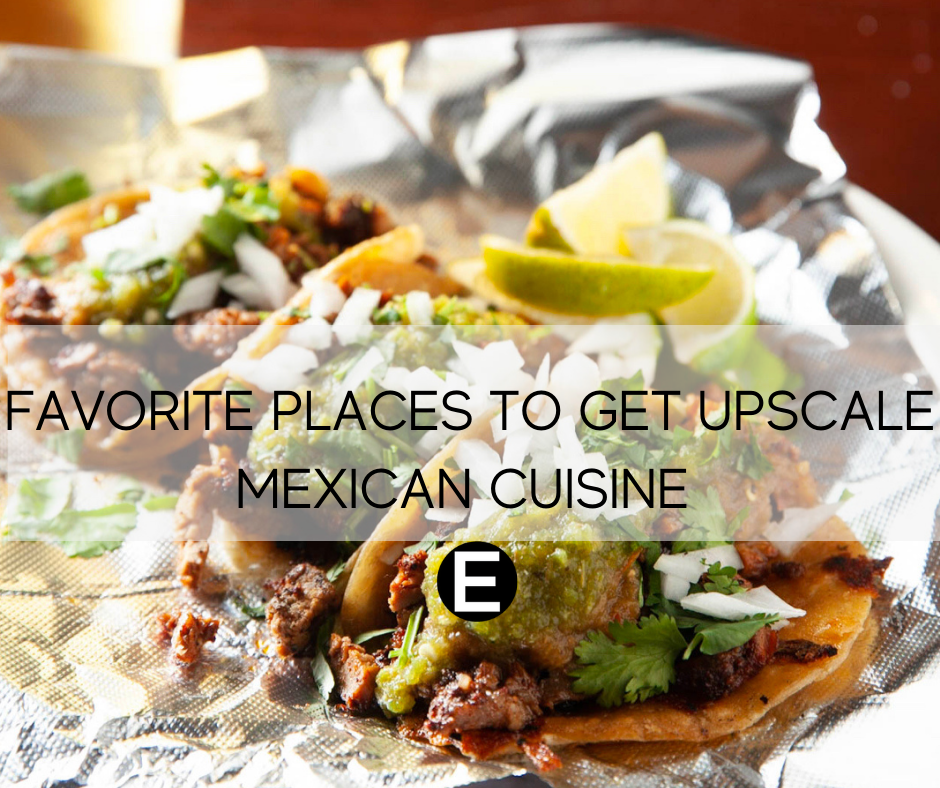 You’ve probably heard people on social media saying, “I don’t know the meaning to happiness, but I’ve never been sad at a Mexican restaurant.” We totally agree. Check out these amazing restaurants to get some of the area’s best upscale Mexican cuisine.

Named the “Best Mexican Restaurant in Huntsville,” Rosie’s Cantina is a fun and festive atmosphere for casual family dining. Serving honest, handmade Tex Mex favorites as well as innovative house specialties in an atmosphere filled with unique works of art, antiques from Old Mexico and upbeat music. Enjoy lunch or dinner indoors and out year round or relax fountain side beneath beautiful Mexican architecture. A full service bar features Rosie’s famous Margarita Menu, an extensive collection of Mexican beers, tequilas, select wines and martinis. Our Mambo Taxi is legendary. Locally owned and operated since 1995, Rosie’s is a Huntsville tradition.

At Buenavista Mexican Cantina, their belief is that good food is finding that perfect balance between the way something looks and how it tastes. Their menus offer traditional Mexican fare like fajitas, burritos, quesadillas along with Buenavista specialties like Mexican Lasagna made with your choice of chicken or steak, and Cocktel De Camaron, which is Buenavista’s take on shrimp cocktail.

Josie’s is a café serving dishes originating in America, Italy, France and Spain. Adding flavor and style to Second Avenue.

For fresh Southeastern coastal oysters as well as sushi and more unusual items like alligator tacos, fried pork skins unique burgers, look no further than 5 Point Public House and Oyster Bar. The new South-side hot spot boasts an eclectic menu that is the brainchild of award-winning chef/owner George Reis. The foods aren’t the only attraction, with more than 30 craft beers, 20 beers on tap and cocktails offered to pair with the food. The restaurant also has something unique to Birmingham—eight keg-style wines on tap to be served with dinner or enjoyed in the pub-style atmosphere of the new gastropub.

With outstanding reviews and consistently high praise from customers, Baja California Cantina and Grill in Hoover should be on the top of your list for the best Tex-Mex cuisine, delicious drinks with your favorite spirits and impeccable service.

Visit Margaronas Cantina in Homewood, Alabama. Serving traditional and authentic Mexican dishes, Margaronas Cantina has quickly become a stand-out among locals. The modern atmosphere pays tribute to Mexico with a heightened level of comfort and sophistication. Enjoy dining inside or out on the covered patio. The full bar offers the finest tequilas and all of your other favorite spirits. The owners and staff will greet you at the door and ensure your experience is the very best in Birmingham.

The view from The Roof at Redmont Hotel in Downtown Birmingham. Photo: Brent Boyd 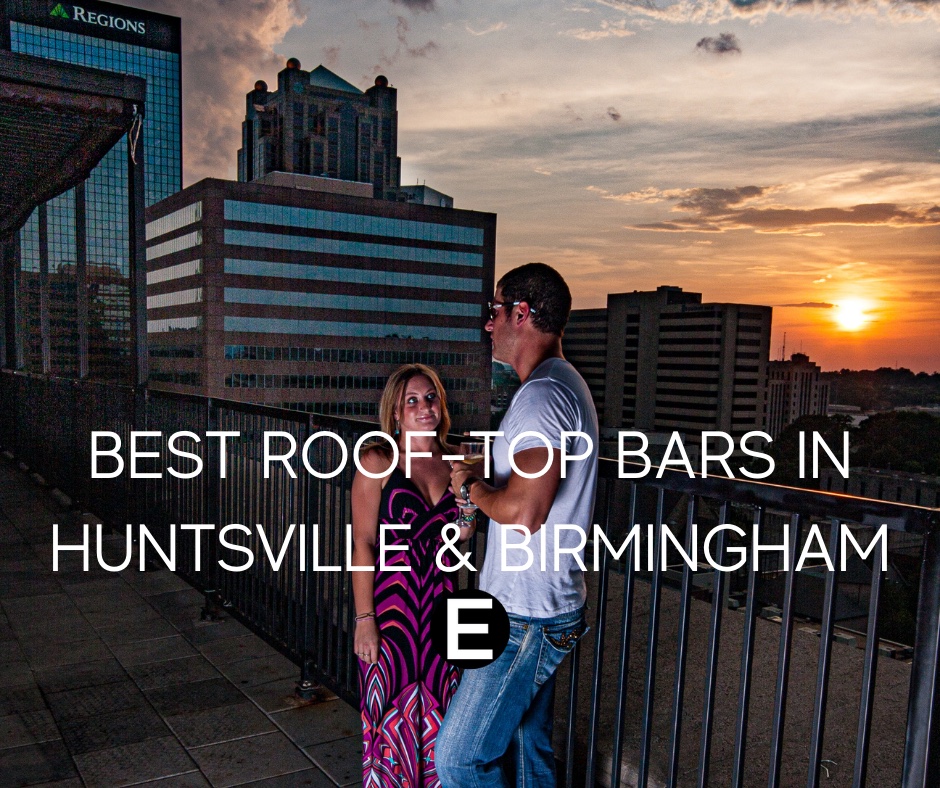 An amazing view just makes that drink or meal even better, right? The city lights and sounds make for an experience that you’ll remember and talk about for days and months. Check out some of our favorite rooftop bars in the Huntsville and Birmingham area:

Stella’s Elixir Lounge was voted Best Cocktail Bar in Huntsville! This sophisticated, fun, upbeat lounge is the perfect meeting place after work or date night destination. Gather around a cozy fire pit and sip on your face elixirs while catching up with friends.

Rhythm on Monroe is the on-site restaurant at the Von Braun Center in downtown Huntsville. This trendy restaurant features locally sourced urban fare and local craft brews and wines. You’ll have an amazing view of Big Spring Park.

Pourhouse at Stovehouse comfortably swanky bar sits at the heart of the food garden at Stovehouse, a mixed-use development. The unique round bar is the first of its kind in Huntsville, serving cocktails, wine, and beer with a large screen, showing movies and sports daily. The first rooftop bar in Huntsville also offers a wrap-around patio with fans and heaters, making this outdoor seating area comfortable year-round.

The Roof at the Redmont

If dining under stars is your idea of a great night out, Roots & Revelry will not disappoint. They are located in the historic Thomas Jefferson Tower in downtown Birmingham and have been lauded for their inventive menu serving update American classics, specialty cocktails, and weekend brunch. Open Tuesday through Thursday for dinner, Friday and Saturday for brunch and dinner. In addition to rooftop dining, they have a beautiful dining room, also and can accommodate you regardless of weather conditions. Be sure to make reservations at opentable.com as this is one of the hottest spots in the Magic City.

Located on historic Morris Avenue, Carrigan’s Public House is the place to experience the best of Birmingham’s food and craft cocktail scene. Each cocktail at Carrigan’s is hand-crafted and the beer selection includes plenty of locally brewed choices as well as favorites from all over the world. The menu features traditional pub food taken to a higher level with fresh ingredients and everything made in-house from scratch.

From the huge front patios on both the main and upper levels, you can see a bit of over-the-mountain Birmingham as well as the historic train yard and cobblestones of Morris Avenue. And when the sun goes down, Carrigan’s comes alive with locals enjoying great food and city nightlife. Open Monday through Saturday beginning at 4 pm.

Other favorites: Moon Shine at the Elyton, Michael’s Restaurant, and The Southern Kitchen and Bar.