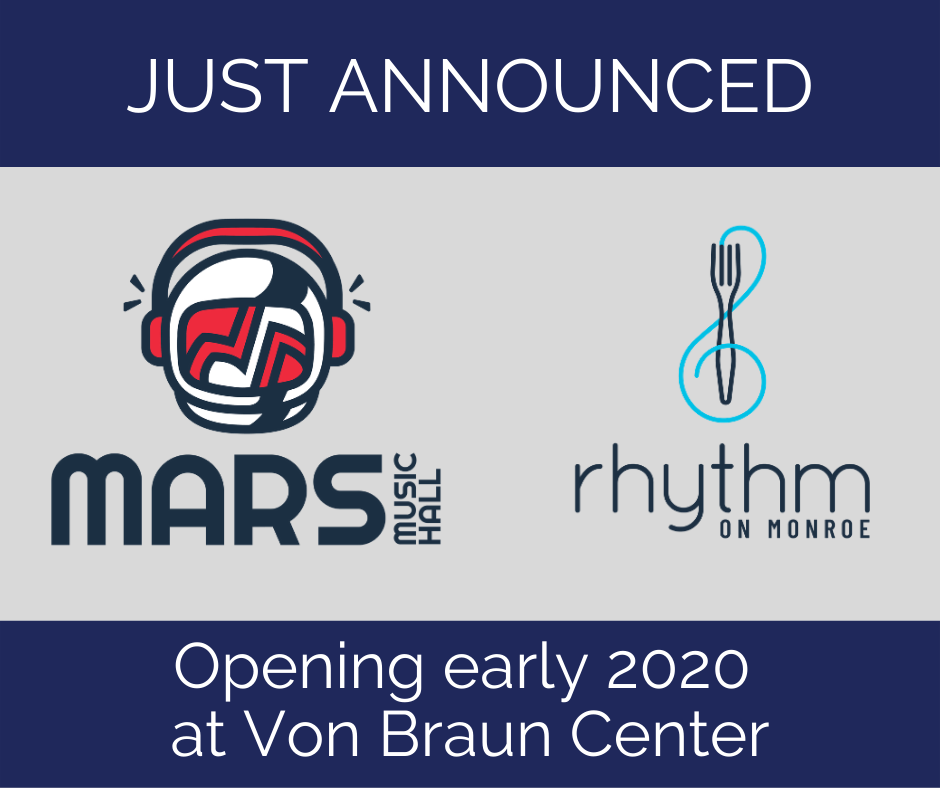 Huntsville, Ala. –  The Von Braun Center (VBC) revealed the names, logos, and event lineup for the new music hall and restaurant in downtown Huntsville during a presentation inside the Propst Arena on the evening of Tuesday, October 29.

In a video presentation, updated renderings from the architectural firm, Matheny Goldmon, previewed Rhythm on Monroe – a full-service restaurant and rooftop bar.  Rhythm, aptly named for the different types of musical performances hosted at the VBC on the corner of Clinton Avenue and Monroe Street, will serve locally-sourced ingredients and provide fresh urban fare.  It will feature craft brews, a curated wine list, and handmade cocktails that guests will be able to enjoy while sitting near fire pits at the rooftop bar overlooking Big Spring Park. Watch video

“Rhythm will be the perfect spot for a pre-show dinner, after-show cocktails, or just a great dining spot without attending an event,” remarked Von Braun Center Executive Director Steve Maples.  “The expansive open views on the rooftop bar will be a great place to watch the sun set over Downtown Huntsville!”

Rhythm on Monroe will open early 2020.  Additional details and a new website are coming soon.

Changing the landscape of the music scene in Huntsville, the VBC’s newest venue Mars Music Hall will provide an open floor plan, with a balcony overlooking an oversized stage.   With a 1,575-person capacity – this intimate setting will offer great acoustics for a variety of events ranging from concerts to comedy acts and everything in between.

“This is an exciting time, not only for the Von Braun Center but for the Tennessee Valley region,” continued Maples.  “The City of Huntsville is developing at a rapid pace and is constantly attracting out-of-market visitors and enhancing the quality of life for local residents.  Adding this size and type of music venue to the heart of the city is an important step in continuing that growth, and we could not have made this happen without the support of Mayor Tommy Battle and the City of Huntsville.”

Setting the tone for a strong lineup of acts, Jason Isbell will make Von Braun Center history by being the first performer on the Mars Music Hall stage on Friday, January 3, 2020.  Also on queue for Mars are Black Jacket Symphony, Tig Notaro, Chris Janson, Graham Nash, Jo Dee Messina and many others.  To see the full lineup of announced performances and to learn about purchasing tickets, visit marsmusichall.com.

The addition of these two new venues at the VBC is part of an ongoing expansion project, approved by the Huntsville City Council in June 2017, which will ultimately include a new ballroom and multi-purpose space; renovation of the existing North Hall; the addition of breakout meeting spaces and more.  The groundbreaking for the music hall and restaurant took place on August 15, 2018.

About the Von Braun Center
The Von Braun Center is a multi-purpose facility located in downtown Huntsville, Alabama. The VBC offers multiple venues for presenting cultural, educational, entertainment, sporting and social events. With over 170,000 square feet of flexible meeting space, the VBC is able to accommodate events of all sizes.